In 2014, TSSU discovered several departments had stopped paying Teaching Assistants (TAs) according to the salary formula in the Collective Agreement (CA), with two of the most egregious examples being the Mechatronics Engineering Department (MSE) at SFU Surrey and the Biology department at SFU Burnaby. In the Mechatronics Engineering Department (MSE), a TA appointment that should pay 5.67 base units under the TSSU/SFU Collective Agreement is paid as little as 2.17 base units, in violation of the agreement. In Biology, TSSU found the description of the work given to the union on contracts in certain courses differs from the hours of work TAs are spending in the lab on their TUGs.

TSSU filed a grievance against the employer once this exploitation was discovered and the issue went to arbitration. During the arbitration the Employer made several disturbing statements indicative of their intentions to move towards a pay system in which TAs would be paid an hourly wage for their time in the classroom, rather than the salary system that has existed for nearly 50 years – a shift that could result in a pay cut of as much as 50% for some TAs. SFU’s lawyer even went so far as to state: “You could argue whether a TA sitting in tutorial is even work. The Employer’s instructing witness from Biology indicated that TAs made be assigned to work in a lab but “not be responsible for it” and thus not have those hours included in their salary calculation, despite being required to be there and do work.

In the case of Mechatronics the arbitrator found issues with the contracts and SFU and TSSU are now in a process to compensate people who were incorrectly paid. In the case of Biology, the arbitrator found that it was permissible to assign a TA additional contact time where a TA is not primarily responsible for the tutorial or laboratory. TSSU strongly disagrees with this interpretation, and will continue to advocate through organizing and bargaining for a fair system that ensures that TAs are compensated when they are in the lab.

What’s the “Base Unit” Formula?

At SFU, the pay that Teaching Assistants (TAs) receive is determined by a pay formula colloquially known as the “base unit (BU) system”. This formula converts the number of weekly hours in the classroom into a salary, which then then sets a maximum number of hours of any duties TA can be asked to perform. The formula starts first by giving 1.17 BU’s for preparation, and then 1 additional BU for each hour spent in tutorial; 2 hours spent in a scheduled lab; and 3 hours spent in an open lab (e.g. the Math workshop).

The BU formula outlined above was developed with recognition of the complicated balance that TAs must often strive to achieve between their teaching and academic responsibilities, and with the aim of ensuring that TAs would be properly compensated for the work they do both inside and outside the classroom. It has been in place since before the TSSU’s founding in 1979 and, to this day, remains one of the most indispensable tools the TSSU has at their disposal for ensuring that departments do not exploit their TAs via unpaid labour. Within this context, SFU’s deliberate and repeated efforts to undermine the BU pay formula are particularly disturbing.

What is the source of the problem?

SFU Administration enabled this to happen by freezing the TA budget across the University in 2011, claiming this was a necessary austerity measure. However, SFU’s student population continued to grow over this time, and the result today is that paid TA work on campus has decreased by 2% over the past six years, while the number of students has increased by 5%. This imbalance has had a particularly disastrous impact on quickly growing departments like Mechatronics in Surrey, who ultimately resorted to deliberately underpaying their TAs in order to “balance the books” and continue running courses.  Additionally, there is little evidence to support SFU’s initial claims of poverty, as their total revenue increased from $420 million in 2009-10 to $480 million in 2014-15 – an almost 15% jump. It is a deliberate choice by Administrators in Strand Hall to continue this underfunding.

I’m Not In Mechatronics or Biology. Why Does This Matter to Me?

For many graduate students, TA work within their department exists as their primary – and sometimes only – source of student funding. That TAs in Biology and Mechatronics make less for the same work thus not only threatens these students’ immediate financial security, but presents a serious obstacle to their ability to complete their degree in a timely manner. Because of Austerity, there is also a risk that the SFU will try to implement the same kinds of cuts in other department. It is a common tactic for employers to start cuts in one isolated department in order to set a precedent that then makes it easier to achieve the same cuts in bigger departments later. These cuts are also likely to continue to target TA funding, as TAs are among the easiest worker populations at SFU to exploit: because so many TAs are graduate students within their departments, the continuous pressure they face to maintain “good relations” with department faculty and administrative staff dissuades many of them from reporting Collective Agreement violations.

I’m an Undergraduate Student. Why Does This Matter To Me?

In deliberately underpaying TAs for the amount of work they do, SFU cheats undergraduate students out of the quality education they deserve. TAs at SFU have for decades formed a vital part of the teaching team at SFU by teaching tutorials, grading assignments, holding office hours with students and writing course lesson plans – and in many departments, undergraduate students can be expected to have significantly more personal interaction with their TAs than with the course supervisors. Because the current BU pay formula compensates TAs for this out-of-classroom work, TAs are better enabled to “put in the hours” to deliver a higher quality of education for the students they teach.

What Can I Do To Help?

The key to solving this problem is to force SFU’s Administration to increase the total amount of funding for TAships available at SFU. Many programs have grown substantially during the 2011-2017 budget freeze, and will continue to grow in the coming years. All departments need fair funding restored to sustain their growth.

TSSU Members in Solidarity with Mechatronics

A TA is expected to be teaching in the lab 6 hours per week, but is given no preparation time, no time for meeting with their instructor etc. Under the Collective Agreement this TA should have received at least a 4.17 BU appointment, but only received a 2.17 BU appointment. 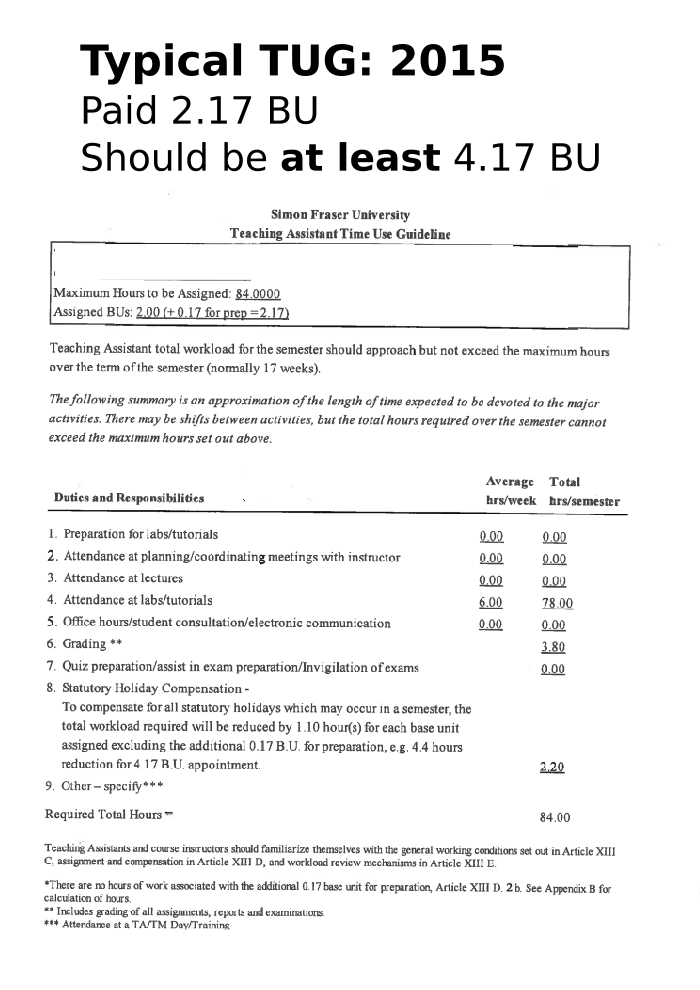 Any appointment with classroom contact time must be paid 1.17 base units for preparation plus a minimum of 1 base unit for time in the lab. This TUG requires a TA to be in the lab helping students but ignores the 2nd half of the calculation. Under the Collective Agreement this TA should have received at least a 2.17 BU appointment, but only received a 1.17 BU appointment. 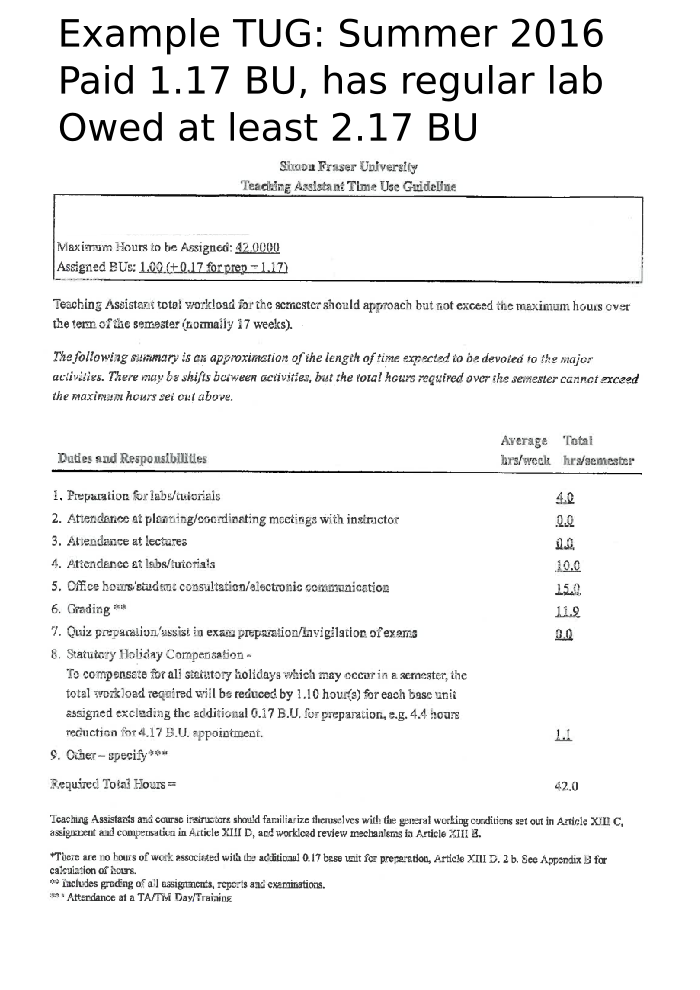