The TSSU is governed by its General Membership, which includes all TAs, TMs, Sessional Instructors, and ELC/ITP instructors who are currently employed or who were employed within the last two semesters. TSSU’s mandate comes from the membership, and the membership is constantly involved by setting the budget and directing the volunteers and paid staff who run our day-to-day operations.

General Membership meetings (GMs) take place three times every semester, traditionally once on each campus, and a minimum of 20 members (known as “quorum”) must be present in order to vote on motions. The Membership has control of the Union resources and must approve the annual budget, financial statements, and most expenditures of the Union. Committees and Executive members make regular reports at the GM and are guided by the motions put forward at those meetings. Also, any member can bring a motion forward at any GM, and those motions can be about anything from supporting other social justice organizations to starting a new committee. If a motion proposes significant structural changes to the running of the Union, such as causing a change in TSSU’s By-Laws, it will be put forward at a GM but not voted on until the following meeting. In some cases, motions may go to a referendum vote. 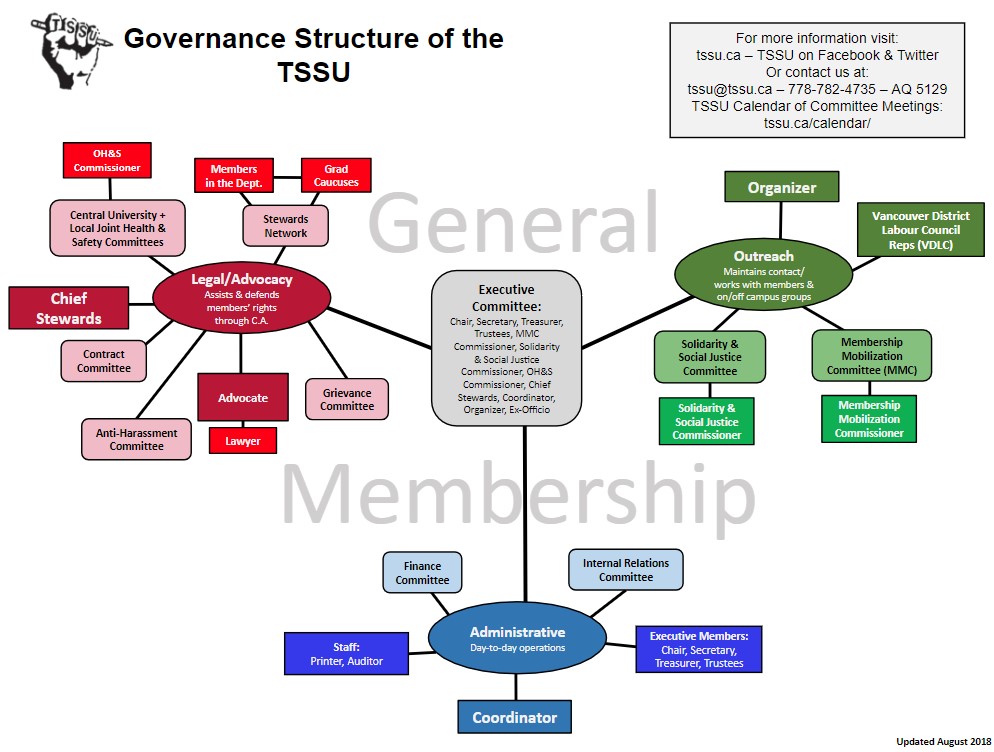 The General Membership populates all of the Union’s committees (see above), each of which is facilitated by an elected member or members. These include the Executive, Solidarity & Social Justice, Membership Mobilization, Grievance, Anti-Harassment, Contract, Internal Relations, and Finance committees, as well as the Stewards Network and various Local Joint Health & Safety committees. Committee meetings of the TSSU are generally open to all members in good standing, with a few exceptions for legal and/or privacy reasons. Any member may join any of these committees by meeting their specific requirements.

Generally, a member must be ratified at a GM in order to join a committee, but there are two exceptions. First, members of the Stewards Network are elected by their departmental caucuses. The second exception is the Executive Committee, which consists of thirteen elected officers who run the day-to-day operations of the Union: the four Salaried Officers (SOs), as well as the Advocate, Chair, Secretary, Membership Mobilization Commissioner, Solidarity & Social Justice Commissioner, Occupational Health & Safety Commissioner, the two Trustees, Treasurer, and Ex-Officio. The SOs – Coordinator, Organizer, Chief Steward I, and Chief Steward II – are elected to one-year terms, and each one devotes 25 hours a week to maintaining the day-to-day activities of the Union. Click here for a more detailed description of the Executive, or click here for the complete TSSU By-Laws & Policies.

The Executive Committee is elected through a vote by the general membership. Elections happen twice a year, during the Fall and Spring semesters, but each member serves for a one-year term. The Union has two election cycles so that new Executive members always start their terms working with members who have already occupied Executive positions for at least four months. Six positions are elected in the Fall: Chair, Chief Steward I, Coordinator, MMC Commissioner/Organizer II, OH&S Commissioner, Trustee I. These nominations open at the September GM and close at the October GM, with the election happening soon after. The other seven positions are elected in the Spring: Chief Steward II, Ex-Officio, Organizer, Secretary, Solidarity & Social Justice Commissioner, Treasurer, Trustee II. These nominations open at the January GM and close at the February GM, with elections happening soon after.